Fatmata is a 50 year old woman who was referred to our facility by one of our service users with history of left breast swelling and pain for eight months. Associated with massive ulceration and offensive discharge of the same breast. There were multiple palpable axillary lymph nodes of the ipsilateral side, however there was no lymphodema. Other associated symptoms were cough, intermittent dyspnea at rest, weight loss, loss of appetite and general body weakness.

She described her pain to be stabbing and constant, worsens by movement and has no reliving factors- not even over the counter analgesics. She scored her pain 5/5 using the five finger rating scale and added that it’s the worst pain she has ever experienced even though she has given birth to eight children.

She said even though she is a religious person but believed that her condition was caused by her sister through under world means as she was told by one of the spiritual consultants. A belief we challenged but failed to subdue in all our counselling sessions. She was diagnosed in one of the hospitals she visited of an inoperable cancer three months ago but her diagnosis was kept a secret as a way to protect her.

She is a house wife with no regular source of income apart from the husband’s pension. She was accompanied by one of daughters. She has been with her throughout since she was beset by this inoperable breast cancer. She has run out of her savings through hospital shopping and moving from one herbalist to another.

Since she holds a belief contrary to her diagnosis, we asked if she would like to know what we think is the cause of her condition and her response was affirmative. We did so with the permission to share the bad news with her loved ones. She agreed to bring her daughter into the consultation room. Breaking the bad news was another chapter in the life of this woman and her daughter as they wept inconsolably. With good counselling skills of our staff we were able to move on but we couldn’t subdue the myth that her condition was caused by sibling jealousy. We were able to assure her that she can live pain free, have symptoms controlled and psychosocial support.

Fatmata was admitted for observation and placed on morphine and adjuvant medication, antibiotics and and other medications for symptoms control. The massive breast ulcer was dressed after every three days. Few minutes after administration of morphine, she slept and woke up seven hours later and saying that she has not slept uninterrupted for six months.

With her deteriorating medical status and our inability to subdue her belief pertaining the cause of her breast cancer, Fatmata found happiness in morphine keeping her pain free. She left the hospital with smile and thanks every staff. 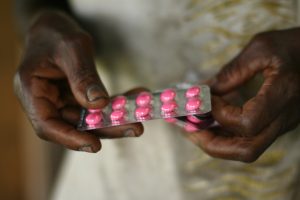 Esta is a 76 year old lady who was brought to the Hospice with severe leg weakness and pain. She was diagnosed with HIV, started on anti-retroviral medication and given symptomatic treatment. She shares her story with us.
“I was paralysed and I could not walk. They put me in a wheelbarrow [to move me around]… I couldn’t walk.
“You all treated me and you came to me where I was [at home], and I felt better. You’ve done good for me. I was sick for about six days and then my brother told me to come here…
“So now I tell people about the MacDonald Hospital [Shepherd’s Hospice is in MacDonald Village]. I was carrying a basket to my neighbour and she said her child was sick and I told them they should go to MacDonald.
“I used to have to lean on a stick to walk, now I can walk by myself. Thank you to all of you.
“My sister buys medicine [to self-medicate], I tell her to come here for her illness. I tell her, “Girl, you saw how sick I was back then, how they came to see me when I couldn’t walk.”

Pa Alfred, 65 years old, came to The Shepherd’s Hospice after his cousin told him about “the hospital that can treat cancer pain”. A successful businessman, he had the means to undergo surgery in Nigeria when he was diagnosed with prostate cancer 2 years before. But when the cancer recurred in his spine, his doctors had to tell him that no surgery would cure him. Pa Alfred visited hospital after hospital as his legs became weaker and his pain more severe. He arrived at The Shepherd’s Hospice in a wheelchair, gritting his teeth at every bump in the road.
During his admission as his pain came under control, Pa remained in good spirits. He’d say cheerfully, “Today I walked a few steps. Maybe tomorrow I will leap the wall.” He’d often greet the medical team each morning with his favourite parable: “Pain was chasing me, it still wants to chase me. But I turn and say, watch out Pain! Hospice doctor is coming. You’ll have to go now.”
Pa sank into delirium as his illness progressed, but remained calm. He died in hospice in the arms of his wife and youngest daughter. His son said, “…thank you so much for expressing your maximum love and caring for our dad throughout this period.”

11 year old Aminatta troubles began with a sore on her leg. Her family comes from rural Pujehun. Like most people living in the provinces, they tried herbal remedies for months. The sore turned into a tumour in her knee. Finally they made the long journey to the hospital and were told that the tumour was cancerous. Because the cancer had spread to her lungs, Aminatta was deemed unfit for surgery. By now the tumour had grown to 29cm and caused excruciating pain. Aminatta was unable to move her leg and soon the tumour burst into an pressure ulcer that leaked copious and foul smelling discharge. Her foot began to rot from the poor blood supply. As the tumour became bigger, Aminatta wasted away.
The Shepherd’s Hospice team visited Aminatta in the public hospital and started morphine for pain relief. When it became clear that “nothing more could be done” in hospital, her parents agreed for hospice admission. They knew that her days were numbered and just wanted her to be comfortable.
The hospice team did daily wound dressings for her, cleaning out dead flesh and picking out maggots. While we knew we could not remove the tumour or heal the sore completely, our goal was to reduce the stench of her wound and relieve her pain.

Each day Aminatta would visibly relax as we draped a colourful cotton lappa over her bandaged leg after each wound dressing session. One could not but reflect on the literal act of Palliare- not the removal of suffering, but the covering of it with something bright and clean.
Aminatta became more comfortable and less anxious. She showed huge resilience, perking up after wound dressings to ask for her favourite meals (fish pepper soup, raw rice with sugar, and boiled sweet potatoes!)
Aminatta deteriorated early one morning and died with her parents by her side. The Hospice staff cleaned and bandaged her wound for the last time so that her body could remain dry and clean on the 7 hour journey home.